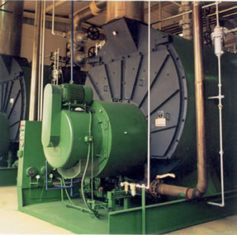 Bay City Boiler & Engineering Company joined the Johnston representative network in October 2014 and they wasted no time in securing new orders for our products. In fact, this past November Bay City Boiler secured an order for two 509 Series boilers for Tesla Motors in Palo Alto, California. These new 200 HP boilers (Model: PFTX200-3G125W) with state of the art low emissions burners will enhance the performance of Tesla’s automotive paint line.

For those of you not familiar with Tesla Motors, Tesla is an American company that designs, manufactures, and sells electric cars and electric vehicle powertrain components. Tesla first gained widespread attention following their production of the Tesla Roadster, the industry’s first high performance electric car. Tesla also designs, manufactures and sells lithium-ion battery packs for supply to automakers such as Daimler and Toyota.

Throughout our 150 year history Johnston Boiler Company has been involved in many high profile projects, including supplying boilers for use in steam cranes which were used to build the Panama Canal. In recent years we have been privileged to provided equipment to many well-known organizations such as Coca-Cola Corporation, Harley Davidson, Jack Daniels Brewery, and General Motors Corporation, just to name a few. With shipment of these boilers to Tesla Motors, we can now add Tesla to our growing list of satisfied customers.